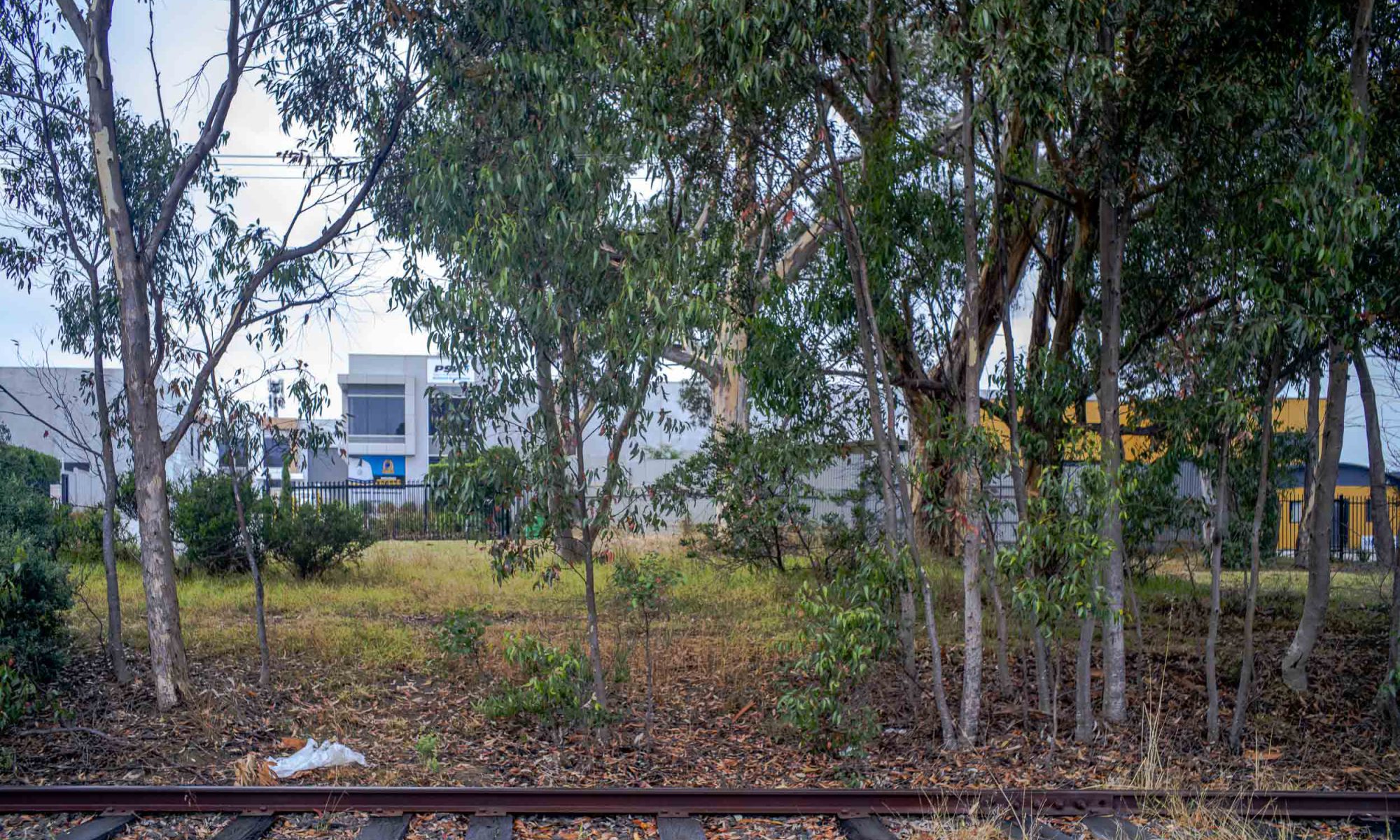 When we were in Melbourne, Victoria for several days to check out a new standard silver poodle to replace Kayla we stayed at Mornington close to the local racecourse. We didn’t have time on this trip to walk the Balcombe Estuary Nature Trail from the Nepean Highway to Mt Martha Beach. That walk, which was photographed by Joyce Evans around 2003, is planned for our next trip to Melbourne in early February, when we pick up the standard poodle puppy from Cranbourne.

Whilst in Mornington we were able to go for several early morning poodlewalks with Maleko to, and around, a local wetland at Narambi Station Reserve. We avoided the adjacent Narambi sportsfield even though it was popular with the local dogwalkers.

On a couple of those mornings we started to explore the nearby Tanti Creek and the heritage Mornington Railway line down to the Mornington Station. We eventually found a way to walk though this raw and rough area to the station at the end of the line.

After I’d taken Maleko to see the Chirovet at Old Port Rd at Albert Park, near Port Adelaide, I drove down to the Port for a coffee at the Red Lime Shack cafe in Vincent Street. Then Maleko and I wandered around the Port. I was going to do some scoping before I returned to Adelaide to pick my negatives from Atkins Photo Lab. Unlike Bond Imaging in Melbourne Atkins still continue to develop roll and sheet colour film.

It had been raining during the night and in the morning in Adelaide, but the cloud cover was starting to break up when we started walking. The Port looked picturesque with Grand Big Top of the Zirka Circus next to Hart’s Mill. Another sign that the revitalisation of the Port was happening. I couldn’t resist taking a snap:

I had planned to spend a couple of hours exploring, and returning to walk around Mutton Cove Conservation Reserve in Osborne, but it was very hot and humid around midday so the photowalk was cut short.
END_OF_DOCUMENT_TOKEN_TO_BE_REPLACED

I really should have  been using a large format camera–ie., the Cambo 5×7 SC monorail— for this architectural work, but that had been left down at Victor Harbor.   I needed to bring the iMac back to  town work on for the next month or so that we are in the city.  END_OF_DOCUMENT_TOKEN_TO_BE_REPLACED

Ari and I walked around Regency Park in Adelaide last Friday whilst Suzanne and Maleko were at puppy pre-school. I was looking for material for October’s architectural theme for my 1picady2014 project. It was around 6pm, the sun was just going down, and we had an hour or so to fill in. I didn’t have the lightweight Linhof tripod that I’d acquired for the digital camera on me. So I gave up on the idea of returning to the Dry Creek Area which I had initially planned to revisit.

So we just ambled around this industrial/warehouse area. It was pretty quiet. Most of the warehouses had closed and the workers had gone. There was just a couple of workers relaxing at Nippys.

The odd semi-trailer rolled through the area and one went into Nippy’s. The wife of a Muslim couple was learning to drive a car and the ute crowd were using the ATM to get money for their Friday night’s fun. Apart from that it was very quiet. It was quite suitable for some large format photography.

A phone call from my pro-lab. There’s been a slight mistake made. We have crossed processed your colour negative film (C-41 process) as slide film (E-6 process). My heart sank. So much time and effort had gone into making those photos. I quickly went down to have a look. The negatives have an image–they’ve been exposed okay and there were no light leaks–but they look very orange.

The picture below was taken on an early morning poodlewalk. A similar one was made with the 5×4.

The 5×4 negatives have been given to the pro-lab’s scanning and art department to see if they can be rescued.

The last poodlewalk in Melbourne was done by car. On my previous visits to Melbourne I’d seen some architecture on the Nepean Highway that caught my eye, whilst I travelling on the Frankston train to the CBD. So we–Suzanne, Ari and myself— cruised the Nepean Highway from Frankston to Mordiallic looking for “Custom Framing” and a big bold blue building.

It was the day that we had Agtet, our grey standard poodle, put down. We were to drive back to Adelaide early the next morning, and we had heavy hearts and time on our hands. A phototrip in the car was my way of filling in the afternoon. Suzanne drove the car whilst I looked out for the building.

I was in Melbourne for four days for the photo shoot and it rained three out of the four days. Sunday was the only fine day. On Friday the temperature was 17 degrees, Sunday it was 33 degrees and on Monday it was back down to 18 degrees. On Monday it only stopped raining as I was leaving in the bus at 8.30pm.

I found the 5×4 gear (pack and tripod) heavy to lug around the CBD. I was mainly shooting large format between the showers, or before the rain started, and the bad weather meant that I didn’t get as much done as I would have liked. I pretty much walked to a pre-selected location, set up the Linhof, take the pictures, then move onto the next one pre-selected location.

I did a 5×4 version of this on Monday, before the wind came up and the rains swept in. It rained the rest of the day–just like Friday, the day I arrived. A large part of the time on Friday and Monday was spent on urban explorations with handheld (digital and film) cameras.

This is my reason for being down at Victor Harbor this week–I’m overseeing the installation of photovoltaic solar panels on the roof of the weekender at Victor Harbor. The solar photovoltaic electricity system is costing us an arm and leg re the capital required, as it is a big (2.4kw) system.

The solar panels absorb light and turn that into electricity via a converter that is plugged into a standard ETSA household fuse box that is connected to the national electricity grid. So we are both taking power from the grid and putting power back into the grid.

The assumption is that with the feed in tariff means this size solar power plant on our roof will generate more energy than we use, and this will then–hopefully—provide a bit of an income from the weekender through the feed-in-tariff.